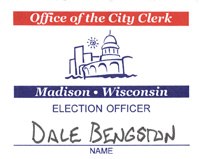 A while back, I decided a good way to get involved in my neighborhood and community was to volunteer at my polling place (Hoyt School) during elections. I did some digging and could find no information on how you do this in Madison, so I eventually e-mailed my Alderperson. She immediately put me in touch with the proper deputy city clerk who handles poll workers, or “Election Officials,” as they’re known. The Deputy Clerk notified me of a training session in January, which I attended along with about 200 other people. One of the other volunteers said the last time she’d come to the training, there were 30 people there.

I asked at the training session how and when I’d find out if I’m scheduled to work or not. The city officials there said they’d start with the regulars on their list for each polling place and if they needed more, they’d start calling us new volunteers. (Actually, I learned that Election Officials aren’t volunteers. They are paid $9.00/hour for their time.) Weeks went by and I didn’t hear from the Deputy Clerk so I assumed they had fully staffed my polling place. I have to admit I was disappointed, because I was looking forward to helping out.

This Tuesday morning, primary day, Laura asked me one more time, “Did you ever hear from the city about working at Hoyt School?” I hadn’t. Oh well, they must not need my help.

After I dropped my son off at school Tuesday morning, I went to Hoyt School to vote. I gave my name to the Election Official, and he looks up at me and says, “Hey, you’re that guy who’s working this afternoon that none of us know! It’s nice to meet you!”

I happen to catch the Election Chairman for my polling place working the table. Sure enough, I’m on the schedule: There’s my name, right next to my home and work phone numbers on the list. The other Election Officials are all surprised and embarrassed that no one called me. Since I work for myself, I quickly gave myself the afternoon off. I dashed off to a meeting with a client, and tried to get my day cleared until 9pm. (I eventually give up on this idea and just bail out on real life until further notice.)

Then back to Hoyt School at noon. I’m sworn in, using this verbose oath that the Chairman says got a lot longer after the 2000 Florida debacle. Since I’m the only new person, I get to do everything in order to learn. I sort and log in absentee ballots. I log in registered voters and hand out ballot slips. I write the ward numbers (70… 70… 70… 70… 70… 71… 71… 71… 71…) on pads of voter slips. And worst of all, I get to register new voters.

I am a complete curiosity at Hoyt School because I am 25-35 years younger than any other Election Official. (Except for my alderperson, who was the only other non-grey head there.) Both the other Election Officials and the voters want to know what my story is and why I’m there. They seem surprised that anyone under 60 cares. This makes me sad.

Voter traffic is steady all afternoon. It’s mostly full-time parents and old people during the day, and then things pick up as working folks come out after quitting time. I’m pretty sure I was “set up” to be at the voter registration table for the after-work rush, but hey, what’s wrong with a little hazing of the new guy huh? I’m registering people with alderperson, and in between customers she’s telling me all the behind-the-scenes scuttlebutt on the neighborhood, such as the UW is selling Hilldale Mall (our neighborhood shopping center) and the whole block it’s on to a group of Chicago developers for $80-odd million. We can expect big changes there and elsewhere along University Avenue.

About 2pm there’s a water leak in one of the locker rooms at Hoyt School and they have to shut the water off. We have no bathrooms or drinking water until they get it fixed about 5:30. Good thing I brought my own water. But do I really want to drink any? Cuz then I might have to….

About 4pm we get a complaint about campaign workers with signs too close to the polling place. Alderperson goes out to check it out. There is a group of John Kerry supporters at the entrance of Hoyt Park, which is right next to Hoyt School. It turns out that they’re not too close to the polling place after all, but they are campaigning from public land (the park) which is a no-no. Alderperson knows all the rules inside and out and patiently explains this to them, and they leave. (Meanwhile, I’m the only guy registering voters. I’m pretty sure I didn’t make any mistakes that will result in jail time. For me. Or the registrant.)

About 6pm things go bananas. The registration tables are out in the school hallway and the entire hallway is clogged with people. Most of the registrations were students with address changes. The rest were new residents from out-of-state or out-of-town. We register about 100 people to vote between 6:00 and 6:45. This is a miracle, because the voter registration forms are, well, government forms and they’re cumbersome and confusing. We also have to figure out, based on the person’s street address, whether they’re in Ward 70 or Ward 71, because this polling place straddles two wards. So we have to look up everyone’s address on this confusing sheet of paper, face south, make them sign another piece of paper, wiggle the big toe on our right foot, give them a voting slip, sing “On Wisconsin,” and finally send them on their way to get a ballot. During this peak time, we are registering a new voter on average about every 27 seconds.

After the big push, a twentysomething woman comes in and walks up to the first Election Official she sees and starts pressing her on why we made the Kerry supporters leave the Hoyt Park entrance. Apparently she’s some supervisor of polling-place rah rah or something for the Kerry campaign. It’s pretty clear that she’s not from Wisconsin. She’s being kind of rude, but the joke’s on her because the Election Official she’s cornered is Alderperson! Alderperson basically bitch-slaps the woman with the city rule book on campaign signs and workers around polling places. The woman ultimately lowers her head and just slinks out. If she would have stormed in during the busy time, I think Alderperson would have taken her outside by the scruff of the neck and the back of the pants and pitched her in a snowbank. (Note to out-of-state campaign lackeys: If you’re going to try and push around an Election Official, pick the younger guy who’s never done it before, not the person sitting next to him who happens to be a city official.)

Any way, we somehow keep things moving and the people just keep coming. Finally it’s 8pm and the polls close. The people are still coming right up until 8:00. The Chairman goes to the front door to make the public pronouncement that the polls are closed and comes back smiling. He says his announcement was met with a loud “Sh*t!” from the darkness of the parking lot. People still come after 8:00 and we have to turn them away. One woman has brought her young son and we let her in and she shows him how everything works. We give her a sample ballot so she can show her son how everything gets marked.

Two people from county commissioner campaigns actually sit out in the hall and wait for the tallies. We forget about them until finally one walks in and asks for the numbers. Whoops. Sorry you missed a half-hour of the election-night party, dude.

Finally, about 9pm the closing procedure and checklist is complete. The Chairman takes the stuff and heads for City Hall to give them the vote tally. Forevermore, when I see that line on the election returns that says “85% of precincts reporting” I’ll think of the Chairman on the steps of City Hall, being attacked by the news media and the campaign pollsters as he tries to deliver the vote tally to the City Clerk.

All told, we had 1,860 people vote out of a precinct with 2,936 registered voters. That’s a staggering 63% turnout, which I’m pretty sure was higher than our general election turnout for 2000. The other Election Officials, who have been doing this since statehood, had never seen a turnout like that for a primary. We registered about 200 new voters, but most of them (probably 180) were just student address changes.

What I learned from this experience was…