Yesterday: Day 12 – Chamberlain to St. Paul
To start at the beginning of this series, go to Day 1

Tom’s gone back to work and Pete’s gone on ahead to Madison, so Laura and I drift on out of town. We have lost our co-pilots, so we’re traveling alone, each in a vehicle. We have the CB radios to keep us company. I suggest the slow way to Madison, down Highway 61 (yes, THAT Highway 61) through Winona and LaCrosse and then Highway 14 on to Madison.

We make a stop in LaCrosse for lunch, and climb to the top of Granddad’s Bluff to enjoy the view. We also take a side trip to the house south of LaCrosse where my parents lived from 1983 to 1987.

When we arrive in Madison, we find our new apartment full of moving boxes, courtesy of our friends who let the movers in… and then proceeded to use our grill to have a barbecue with them. We also found a little “welcome to Madison” present: a bathroom cabinet stuffed full of packing peanuts. Thanks, guys. It was worth making a 4,000-mile drive for the packing peanut welcome. At least you didn’t wrap the toilet in aluminum foil, or make Jell-O in the bathtub.

We are in Madison for less than two days before it’s time for another road trip. On July 15, we repack our suitcases with some fancy duds and fly to Washington, DC, for the wedding of John Blakeslee (Laura’s brother) to the lovely Sandra Coulbourne. Eventually, we get back to Madison. I think it was on July 18th.

2009 Update: Madison. We’ve been here fifteen years now. A lot has happened in those fifteen years. When we pulled up to our new apartment in Madison back in 1994, our wedding was still two years away. Curtis and our house on Mason Street were four years out. Gil and me starting my own business were eight years in the future. And Laura’s return to graduate school is still thirteen years hence. A lot of family and house and home have been built up since the summer of 1994.

So there it is. Thirteen days, 4,000 miles, thirteen brew pubs, eight states. If I had it to do over again, I’d take twice as long; maybe the whole summer.

But I won’t ever do it again. It’s been done. Laura and I (and then with Curtis and Gil) have had plenty of adventures since then. Each adventure builds on the previous. I’ve really enjoyed reminiscing about our two weeks in July of 1994, but now it’s time to once-again thank our co-pilots Tom and Pete for making the trip with us, and to thank Laura for agreeing to move from San Francisco to Wisconsin. And to thank you, if you made it this far.

Who knows, maybe I’ll be able to just Tweet the 20-year retrospective straight into your brain.

2014 Update: Well, I guess that brain-Tweeting didn’t pan out.

Thinking about this at the 20-year point, it seems so far away. (That guy still looks kinda like me.) Reliving this, I’m reminded that my original crazy idea was for Laura and I to make the drive twice. First, we’d take one vehicle and follow the northern route we ended up taking. Then we’d take a one-way flight back and drive the other vehicle on a more southern route. I realized pretty early-on that this was crazy, and inviting co-pilots and doing it all at once was much more reasonable. I’m still trying to get that southern trip back on the agenda.

I was 30 when we made this journey. Do the math. I can’t believe I’m still here to re-tell the story. Now, on to that 20-year honeymoon retrospective: New Zealand, 1996. 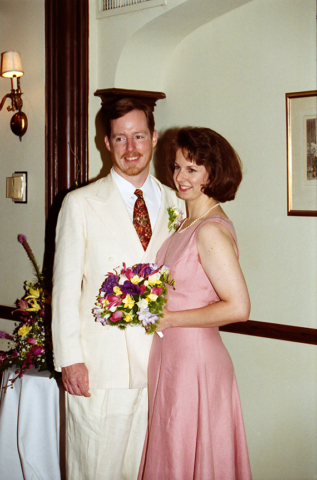 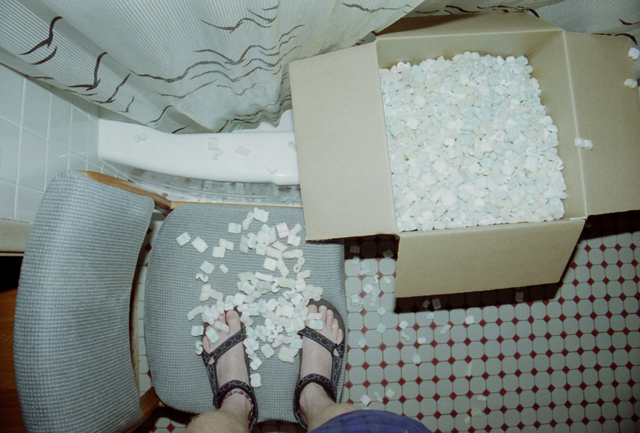 The map won’t save the route, and shows the interstate version. We went on the route that goes through Rochester, MN, and LaCrosse, WI.