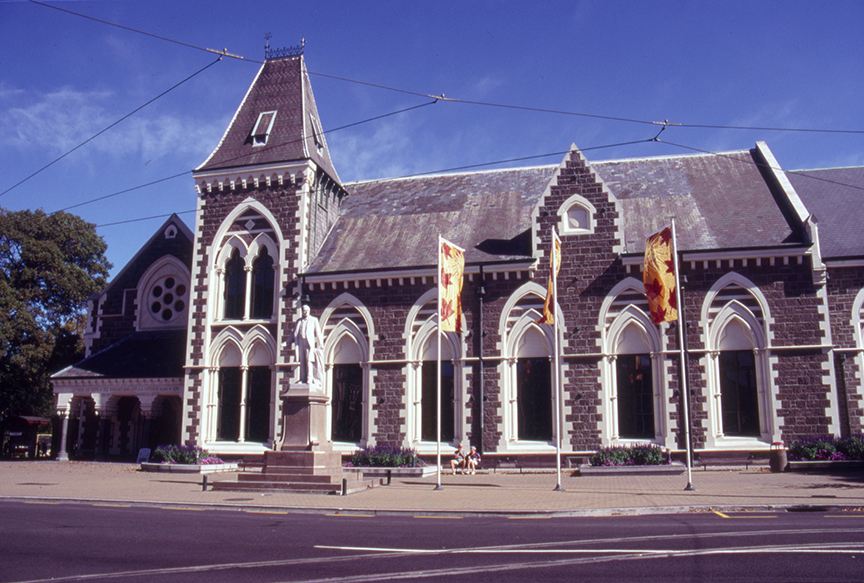 Thanks to our ridiculously-early jet-lagged bedtime last night (4pm), we are up early. This is a good start, and we keep with the early rising for most of the trip. So much for conventional wisdom on jet lag.

This is a city day. Christchurch is a small town by most measures, and very walkable. We won’t pick up our car until tomorrow, so off we go on foot.

As I mentioned yesterday, Christchurch is a very English city, if England had sunshine and tropical plants, and mountains in the distance. It bears little witness to the moa-hunting Maori settlers who arrived here in the middle of the thirteenth century. We’ll find much more Maori presence just about every other place we visit, but not so much here.

Definitely the way to take in Christchurch

We started our walk at the Canterbury Museum, which is in a charming Gothic Revival building that dates to 1882. Christchurch is the scientific jumping-off point for Antarctica (the tourists jump off South America), and the museum has an extensive collection on Antarctic exploration. There’s also a lot of history of Christchurch and New Zealand, which (embarrassingly) we are not really up to speed on. Chalk that one up to our honeymoon planning getting swamped by wedding planning.

As we stroll along the Avon River (of course that’s what the river is named), enjoying the warm sunshine, we see people punting on the shallow waters. This looks like a great thing to do on one’s honeymoon! The river is slow and shallow and offers an alternate perspective on the city. We decide to try it after lunch.

Suddenly, the placid waters of the Avon River and the peaceful atmosphere are broken up by a raft race. We are not expecting a loud, silly raft race on a Wednesday morning. The water is so shallow that half of the rafters are running in the water, pushing their rafts along instead of paddling. Yeah, after we stop laughing, we decide it’s a very good idea to save our punting for later in the day.

We walk on through the city, and I can’t stop myself from poking my head into a used record store. Back in the ’80s, some friends of mine had received a record album by an Australian band called Redgum. We got a little bit obsessed with Redgum and managed to score a couple more of their albums from friends and family who visited Australia. I’m not in Australia, but maybe there are some Redgum fans in Christchurch. Yes! This store has exactly one copy of Redgum’s first album, “If You Don’t Fight You Lose” in the bins! It’s mine. Hello beautiful.

I’m now carrying a vinyl record album in a paper bag around the streets of Christchurch, New Zealand. We have no plans to go back to Eliza’s until dinner time. We have plans to climb to the top of the Christchurch Cathedral spire, punt the Avon, and have some lunch somewhere before I can get my treasure safely back to my suitcase.

But first, the Cathedral itself. Completed in 1874, it’s a beautiful Gothic cathedral with a nave and an altar and an iconic 200-foot tower. We are going up to enjoy the panoramic view of Christchurch from the four balconies at the top. It’s a lot of stairs, but we’re committed. Towards the top, the traditional stairs give way to a narrow spiral staircase. Once at the top of the spiral, we have one more catwalk to climb to reach the balconies. Imagine a ladder at an angle, suspended over an open space with a spiral staircase at the bottom. If you set out to design some stairs to completely freak me out, these would be the stairs. Up we go, keep breathing, ugh. There’s no handrail, but that doesn’t matter because I’m carrying a record album in a bag. Up we go. I begin to focus on the fact that I’ll have to come back down this same staircase. Best not to think about that right now.

Finally, after about seven hours on a suspended ladder (or three minutes, depending on whose story you believe), we reach the balcony level. I don’t like heights, but I’m usually okay on balconies with railings and solid floors. But I am so creeped out by the hanging ladder that I just hand Laura the camera and keep my back to the wall. I’ll enjoy the balcony views when we get the slides developed.

Back down on the ground, we find we’ve missed the Wizard’s act, but he’s still in the square talking to people. We enjoy the sun for a while in the square, and then head back to the Avon River to be punted.

Laura throws some side eye

I’m not sure you can really call this rafting

The view from the Cathedral spire

Another view from the Cathedral spire

The spiral stairs at the top

Happy to have my feet on the ground in Cathedral Square

The Wizard of Christchurch talks to fans

Punting on the Avon

Traffic jam on the Avon

What a glorious way to travel

At the End of the Day: Eliza’s Manor House

A few things have changed since 1996. Many buildings in Christchurch were severely damaged in an earthquake in 2011. The spire of the Christchurch Cathedral partially collapsed, and was later demolished. While the city and the church wrangle over future plans, there’s an exquisite Transitional Cathedral, made of cardboard, a few blocks away. The Wizard of Christchurch is still around, but he’s retired from his stepladder. After my beginner’s luck finding a copy of “If You Don’t Fight You Lose” in Christchurch, I did not see another Redgum album anywhere in New Zealand. I tried. I sure tried.