Our day in Hokitika begins with a fantastic blue sky and ocean view. The drive to Franz Josef is about two hours, and we’re in no rush. We have blue skies above, mountains to the left, and ocean to the right. Easing out of Hokitika, we quickly reacquaint ourselves with the wrong side of the road.

Highway 6 meanders along the west coast, giving us a look at several small towns, plus a phenomenon we read about in our New Zealand Automobile Association maps, but apparently wasn’t important enough for the rental-car agent to mention: the one-lane bridge. In New Zealand, out in the unpopulated areas, they don’t bother to build bridges for both directions. You share. New Zealanders are really laid back about this. There are a lot of on the south island, so we get lots of practice. This would never go over in the U.S.

There are not many people on the south island. We are able to stop in the middle of the highway to take photos. The road turns inland to skirt water. We climb into the hills and along the edge of Lake Ianthe, a pretty Alpine lake with areas for picnics and camping. At one of the sites, a camper is making toast over a single-burner camping stove. He burns his first slice, and feeds it to a duck loitering nearby. Something tells me the duck knows this routine already.

The biggest town we pass through is Ross (population 297), where the road zigs back toward the coast, only to zag inland to find a respectable place to cross the Wanganui River (which is not to be confused with the Wanganui River on the north island). There isn’t much water flowing in the rivers in autumn, but it’s clear that certain times of year these riverbeds funnel a lot of snowmelt to the sea.

After Whataroa (population 405), as we cross the last valley, we stop in the road for more photos. A bicyclist is coming the other way, and I wait for him to get in my shot for some scale. “Make sure you send me a copy!” he says as he rides by. I wish I would have flagged him down and gotten his address.

Since we are doing a lot of driving on this trip, we had an idea about how to eat lunch on the road. There are usually a few farm stands on the outskirts of every town, plus a grocery store further in, plus a village green in the center of town. The idea goes something like this: we’ll buy local apples and possibly cheese at a farm stand, and then some crackers and smoked salmon (and possibly cheese) at a grocery store, and maybe a couple loose beers. Then we’ll find the village green, which always has picnic tables, and have our Standard Picnic. Easy enough, right?

One of the things we were able to learn about New Zealand from the 1996 Paleo-Internet is that just about everything is closed by law on Good Friday. In spite of this, we managed to land some cheese and crackers for our lunch. There are a lot of little towns on this route, but no one can sell beer. We get a little crazy about this idea, and start asking people on the street if there’s a place where we could buy some loose beers and slink out of town.

In one town, which I will not name even after two decades (a promise is a promise), our third or fourth inquiry brings results. A woman points us to the back door of a closed public house. This place looks like it’s grafted onto a single-family dwelling, and we drive down the alley, park a couple houses past the bar and go to the back door as instructed. There is not a car parked on the street or a pedestrian on the sidewalk for several blocks around this place. We knock, tentatively, and the door opens. We press our case to the woman who answers… we are from way-y-y-y out of town, we want to buy a few beers, after which we will leave immediately, never tell anyone where we got them, and never return. She considers our offer for an uncomfortable length of time. We’re thinking she just doesn’t want to deal with a couple Americans on her day off.

Then she says, “Come in, quickly” and lets us in the door. We walk in, and it feels like we’re in her house. We follow her into the bar area and stumble into the less-than-friendly gaze of about forty locals. This place is packed. Everyone’s sitting in the bar with the lights off and the blinds drawn. They all went deadly quiet when we knocked on the door, and you can cut the tension with a knife. I can’t remember if we tried to explain ourselves to the crowd or just kept our heads down. Anyway, we pay cash for our beers, profusely thank the proprietor and skedaddle out of the bar before she changes her mind. Or the crowd decides we are not worthy. Then we get the hell out of the alley and out of town before someone who cares about Good Friday laws figures out what we just did. The karma is good – the beer we’ve obtained is DB Draught. Monogrammed beer!

Our maiden Standard Picnic takes place not on the village green in a small town, but on the back patio of our hotel, the Franz Josef Glacier Hotel (“Thank you very much, we’re very happy.”) in Franz Josef. It’s a late lunch, but a good lunch, with a view. Wow, what a view.

After our picnic, we leave the car at the hotel and walk into downtown Franz Josef (population 330). We get another bout of New Zealand whiplash trying to absorb a town (and glacier) named after the emperor of Austria by a German explorer in an English colony in the South Pacific. The mountains, and the glacier in the valley between them, dominate the view.

Franz Josef is an adorable little town. The focus is on helicopter tours of Franz Josef and Fox Glaciers, plus fishing and other outdoor activities. It’s the cutest tourist town I’ve ever seen, and a spectacular place to end a day of spectacular scenery. Dinner will be easy; there are only a couple places in town. That’s just fine with us. 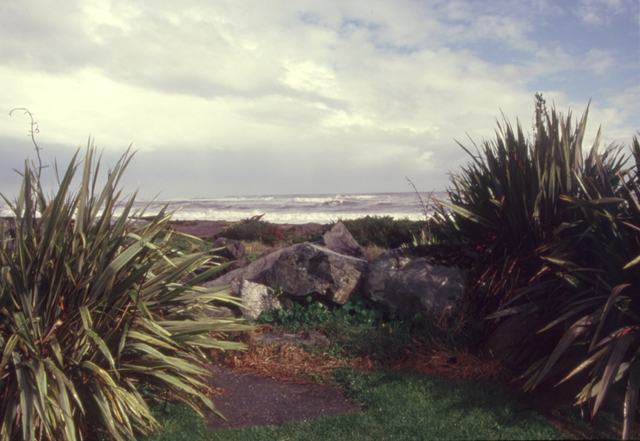 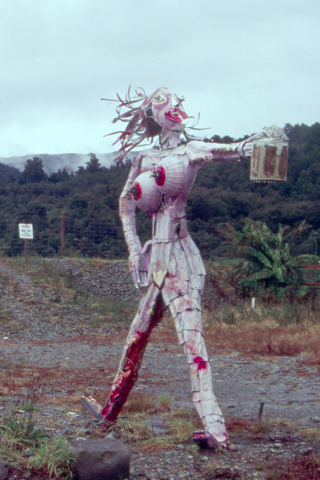 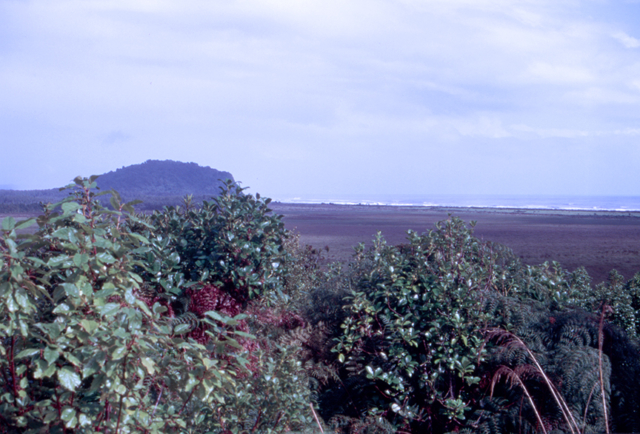 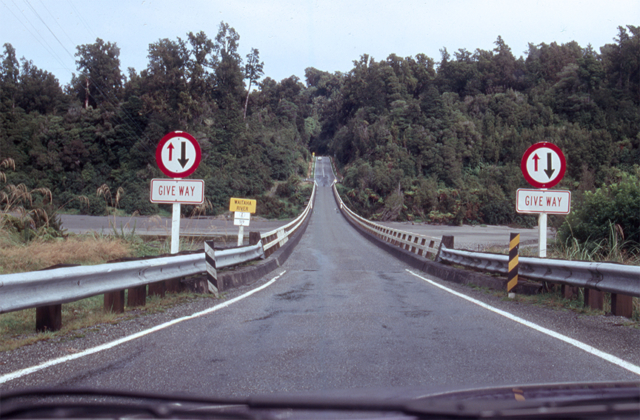 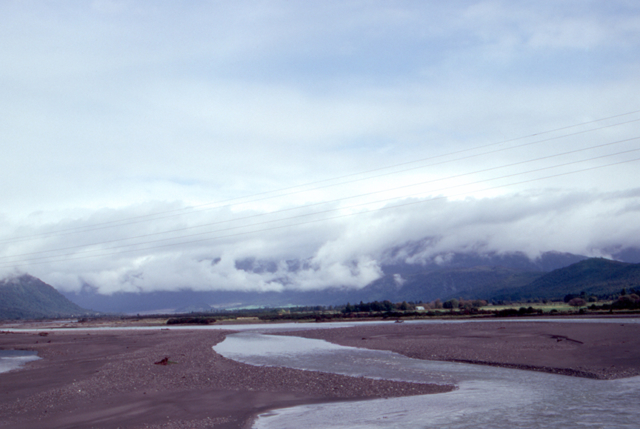 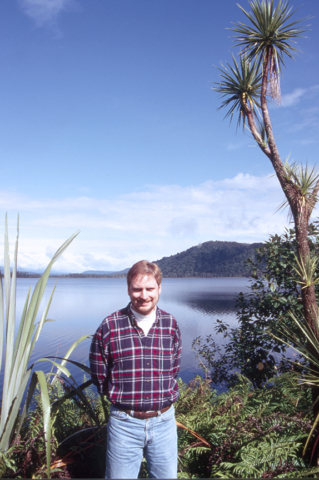 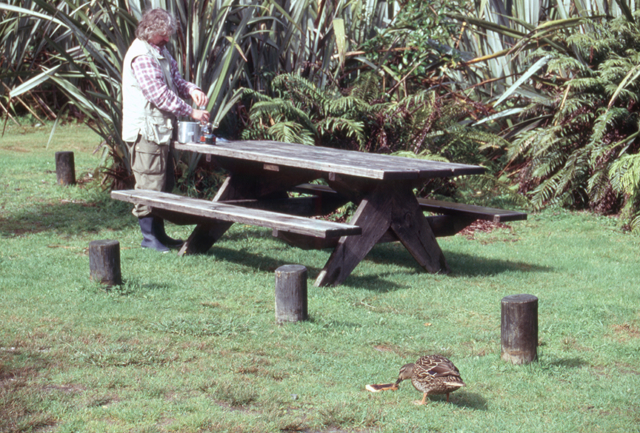 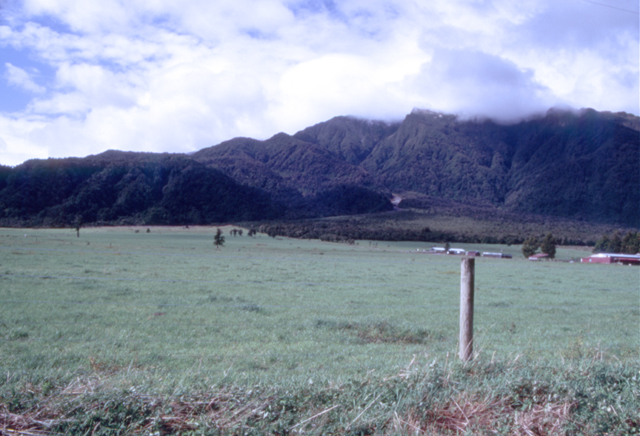 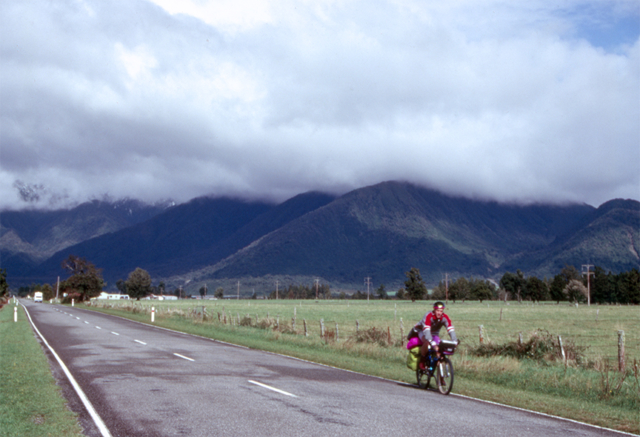 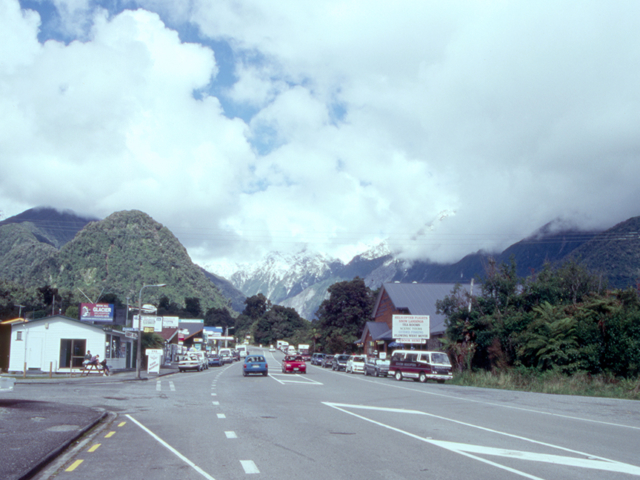 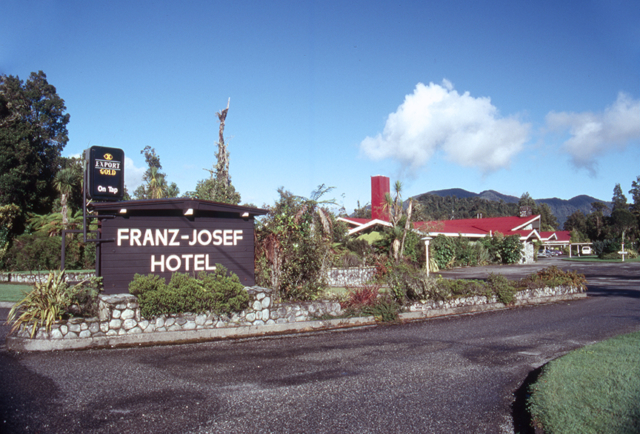 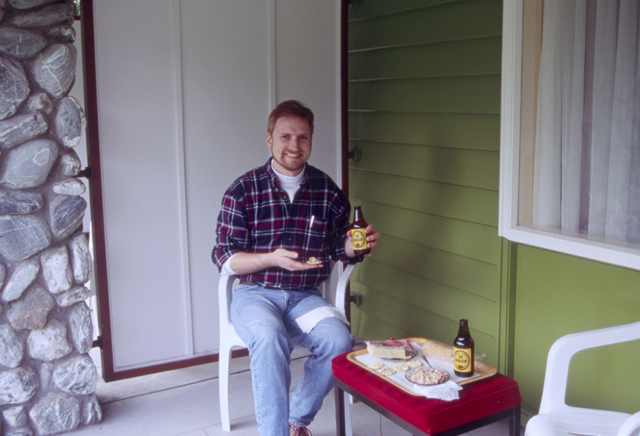 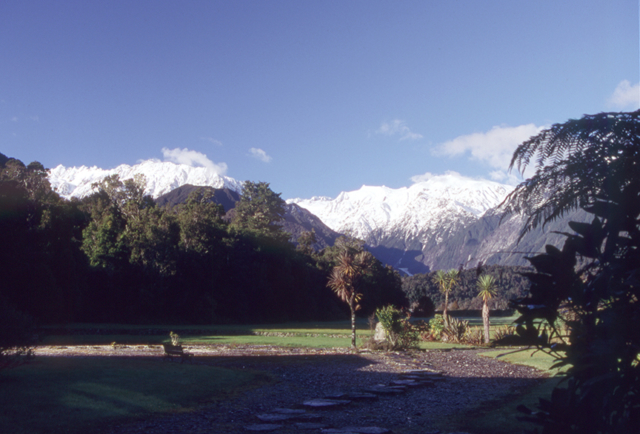 At the End of the Day: Franz Josef Glacier Hotel